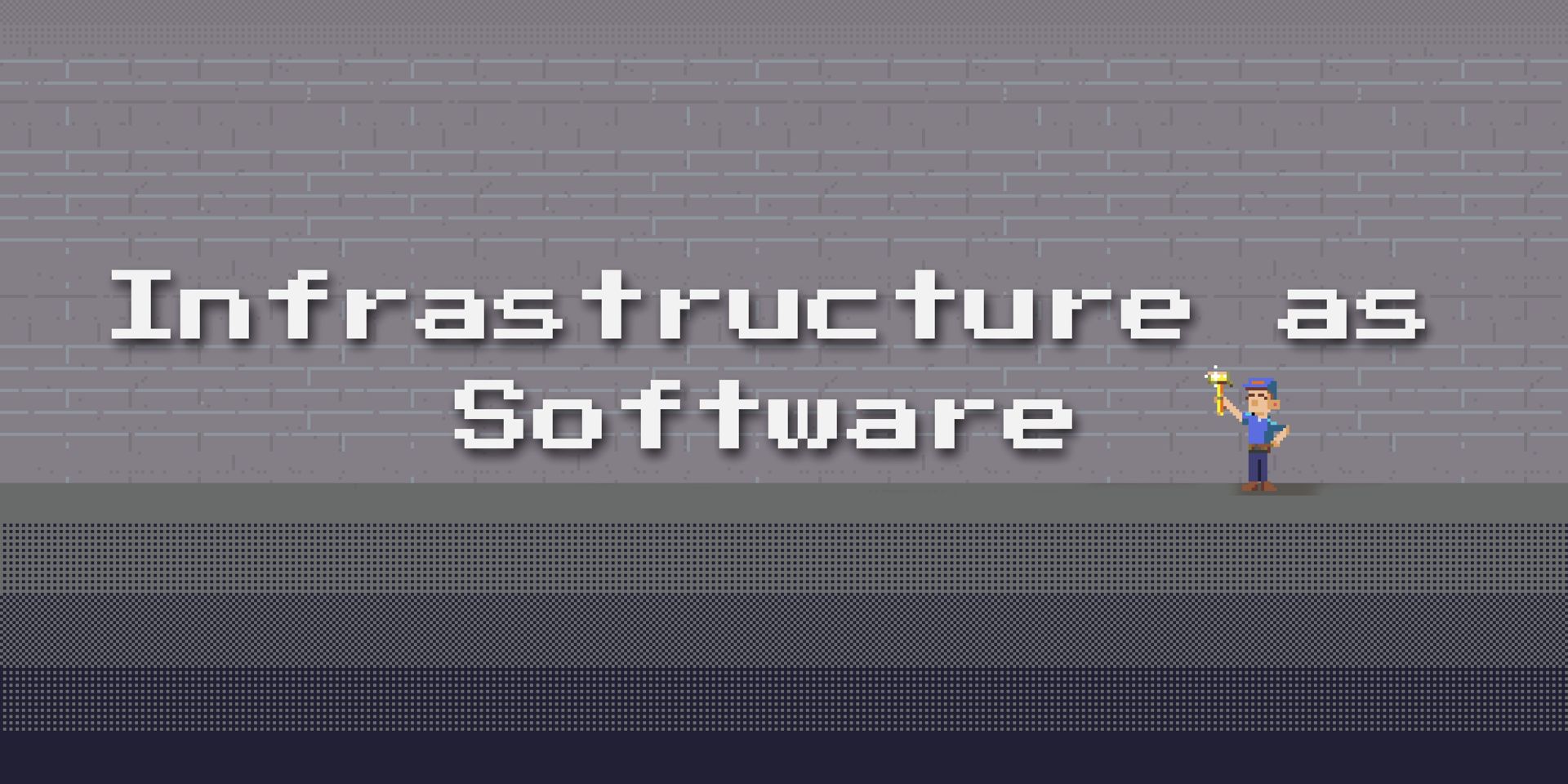 Infrastructure has changed a lot, but the mantra of Infrastructure as Code (IaC) has been the goal for organizations for far too long. The idea that you can create infrastructure with text was a big shift for the industry 10 years ago, but it hasn’t held up to the test of time.

When writing Cloud Native Infrastructure the idea of Infrastructure as Software (IaS) was the main takeaway we wanted for readers. It was the main idea behind what we thought the difference between organizations working with a cloud native mindset and people with an automation mindset.

What infrastructure as software is not

The term isn’t new, but let me say what I don’t consider IaS.

Infrastructure as code with software

The biggest benefits for using the AWS CDK or Pulumi is your can have your developers write the code that creates infrastructure, and you can use coding practices to create libraries other people can share. But, using a general purpose programming language has downsides like runtime version management and non-deterministic outputs. Once I have the power to generate my code, it’s more likely that I’ll make a mistake with my assumptions or lack of familiarity with the code generator.

Writing an application with typescript and infrastructure code in typescript means if you want to upgrade your version of typescript you need to upgrade both at the same time. Keeping your IaC code up to date becomes another maintenance task that can have conflicts with your application code. Application code changes a lot more frequently than infrastructure code and when your IaC is compiled with a different tool and language you can upgrade them independently.

What do you do when the organization scales and you need to transition infrastructure ownership to a new team? Infrastructure engineers are not as familiar with languages like typescript or node and you will likely need to re-write the infrastructure into a language they know instead of train them in a new language and hope they don’t make mistakes.

Writing infrastructure as code with general purpose languages also means you can’t easily share infrastructure patterns between services that are written in different languages. With terraform, my HCL modules worked no matter what language the service is written in. If I write IaC in python and you use typescript we can’t integrate our reusable infrastructure modules together.

Infrastructure as data is all about separating your declarative requirements from the implementation code.

Or I can separate out my requirements from the terraform code into variables which represent the unique data for me.

General purpose Infrastructure as Software requires you to separate out your data and code. Any good software will consume data and do work based on that data.

This is an implementation detail of Infrastructure as Software, but it doesn’t explain why IaD works or how you should create your own reconcilers. For a majority of people using IaD they fall back to combining their data with some form of automation or templating their data into something that can be compiled. With Kubernetes this is the job of helm charts and kustomize.

Using a managed service to create your infrastructure is fine for IaC, but it falls short from what IaS is capable of. A managed service like CloudFormation will take in your data (written by hand or generated from CDK) and apply it.

It’s an Infrastructure as Data pattern but it’s only a 1-way sync (aka automation). CloudFormation requires you to send it data that it can deploy, but when things change CloudFormation is blissfully ignorant and doesn’t correct the discrepency from your desired state and the actual state.

CloudFormation has drift detection but it requires manual interaction to detect drift and then to correct the drift. Infrastructure as Software does this automatically and continually reconciles your desired state and actual state. If Cloudformation had an option to continually reconcile state and sync state into the stack then it would be an implementation of Infrastructure as Software.

The difference between code and software is code is just bits on a disk. Software is bits + electricity. Software is your code in action. It’s continually running to process data.

Typically, IaC is only applied when code files change. You update your IaC files, push them to git, and some CD process (usually Jenkins + bash) runs to “apply” your changes. That’s not good enough for larger teams or when a lot of infrastructure is being managed.

Drift happens. If you’ve never had to manually repair a terraform state file due to drift that couldn’t be reconciled consider yourself lucky. It’s only a matter of time.

Infrastructure as Software reads your data, stores it, reads the infrastructure state, stores it, and then reconciles the two to match. It’s a 2-way reconciler that knows how to imperatively get from one state to another.

Other systems have done this for years. Git is a commonly used reconciler with files. When you do a rebase or merge, git can figure out how to get you to a desired state imperatively.

So, what are examples of IaS? The two best examples I know of are:

Using Kubernetes CRDs + a controller to manage infrastructure is the idea behind crossplane, AWS Controllers for Kubernetes (ACK), and GitOps. It’s also been used for managing state of applications in Kubernetes with operators.

GitOps is a newer idea for using a general purpose reconciler to manage more resources. You can manage applications, Kubernetes clusters, or any CRD. GitOps has some specific principles that can help you think about what properties your controllers should have.

There are multiple options for controllers that implement GitOps. Flux and Argo are the two most popular GitOps controllers I know of. GitOps is an implementation of IaS that is useful for people to transition from IaC.

If you want to hear more I recently just did a talk about Infrastructure as Software and GitOps at GitOpsCon.

If you’d like to learn more about Infrastructure as Software my co-author Kris has a ton of talks about it too. Of course you’re welcome to read Cloud Native Infrastructure book for the full details.