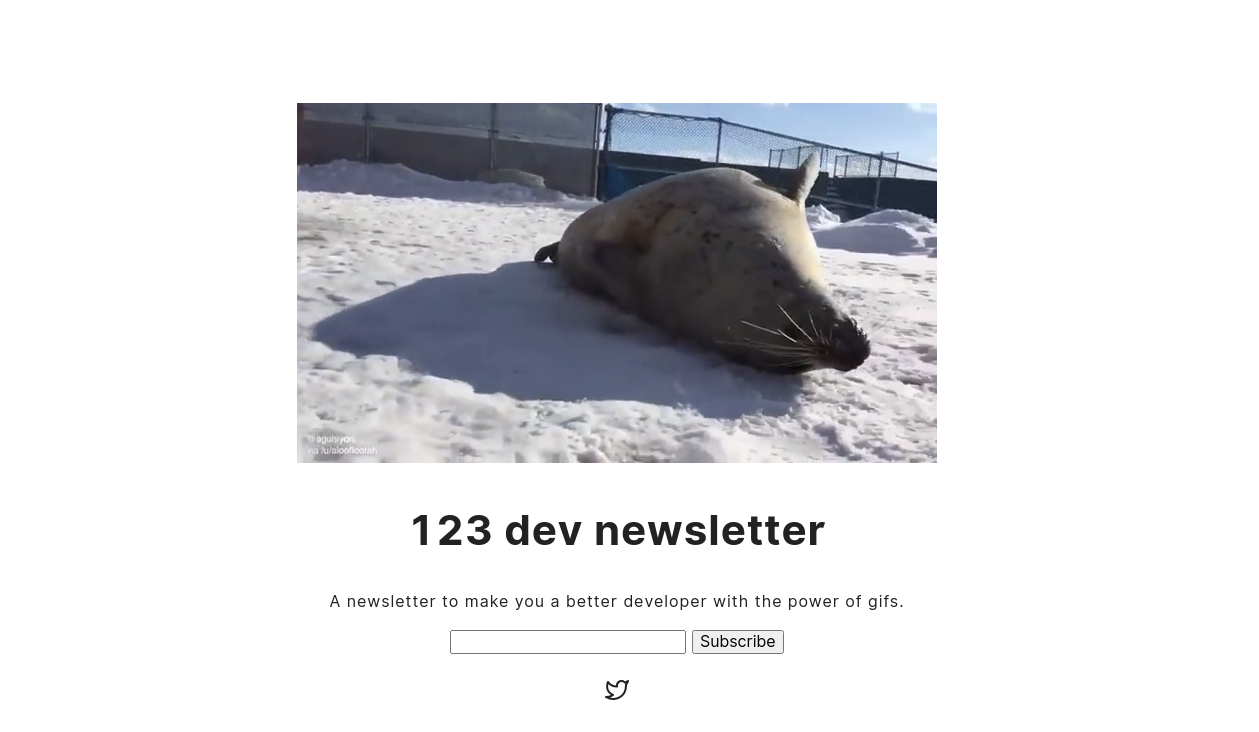 I wanted a landing page for the 123dev newsletter and it was the perfect opportunity to try a few new things.

I have static sites on GitHub, Gitlab, Netlify, and Amplify. They’re all great options for static site hosting but I was missing a few to fill out a complete bingo card.

My main goals were to have a simple layout that highlights the weekly gifs and is easy for people to share. I really wanted a way to embed the gifs into Twitter if someone shared a link on there. I didn’t know how I wanted to accomplish that and it turns out there are multiple options.

I also wanted to give CloudFlare Pages and Workers a try so I started there.

My first problem was getting gifs to show up inline efficiently. I knew I could use gifs but they’re really big which takes a while to load. All of the gifs are under 5MB but if I wanted to have a list of posts that could easily make a page >20MB.

In-line videos is the obvious choice but I didn’t know how to make it work. Turns out it’s not too difficult. Because all of my posts and media files have the same naming scheme I can use the following template in hugo.

And then I just need to make sure each post has a gif and mp4 video. The gifs are usually smaller dimensions and worse quality but they work inline in emails so I still use them.

This worked for desktop browsers but I quickly found that the videos didn’t play on mobile devices. Turns out CloudFlare doesn’t cache the media files with which was causing them not to load. It took me 3 days to find this.

I added a page rule in CF for

Once I got the files cached everything on mobile worked for a day and then it broke again. :( I tried getting this to work in multiple other static hosting sites and the only one that worked out of the box was Vercel.

Vercel has a ton of extra features I currently don’t use but I appreciate how seemlessly it has handled the media files so I’m still using it.

The next project was to make Twitter player cards work whenever someone shared the link on twitter. This was more complex than I expected so I’m going to write another blog post with all the things I tried and what I ended up with.

I added the following config to my config.toml file which tells hugo to generate HTML pages and also a new “FULL” format type. FULL is still an html page but it uses a different default template for the content.

Now I created two template files and put them in ./layouts/partials/twitter-vid.html and ./layouts/posts/single.full.html

Now whenever I run hugo I get all of my standard posts in /posts/ and I get a separate “full” page at /full/posts/. Now I just needed a way to make routing dynamic based on how they’re shared.

The only other thing I wanted on the homepage was a subscribe button. I’m currently using Buttondown for organizing and sending the email.

They have a way to embed their signup form in an iframe which is nice but all you really need is the action link. Here’s what I’m using. It works, but I want to make a couple changes and style updates.

I made a bunch of other theme edits for things like posts lists and all of my pages get more “front matter” so that I can render the variables in the page. One of the main things I needed was the height and width of each video because it’s required for twitter’s player metadata.

I currently get the inforamiton from ffprobe

The final thing to update was I wanted the original signup form at justingarrison.com/newsletter to forward to the new website. That was easy to do by just updating the hugo page to contain a client side redirect with

Like any good side project I’ve learned a lot and the more I learn the more I want to try new things. If you’d like to come learn with me please feel free to subscribe to the newsletter.